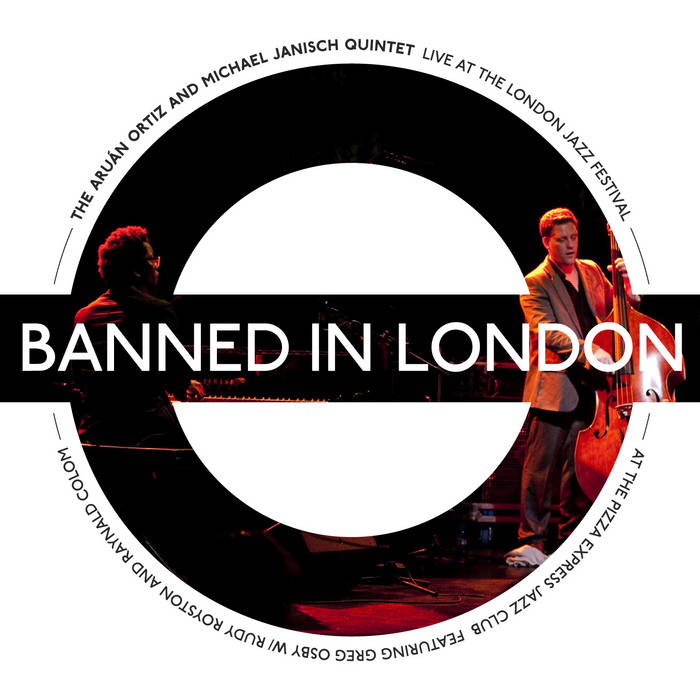 Florian Arbenz It's absolutely great to hear such a burning live set in a great club atmosphere, especially during these times of social distancing! I love the strong personalities of each of those musicians: Raynald Colon is burning, Greg Osby is masterful as always, Ortiz's comping is top of the game and Rudy Royston and Michael Janisch keep the fire going at all dynamics. Great fun to listen to this set! Favorite track: Precisely Now.

This album is dedicated to the memory of Richard Turner.

ONE OF THE MOST TALKED ABOUT GIGS AT THE 2011 LONDON JAZZ FESTIVAL took place at the Pizza Express in Soho’s Dean Street by the Aruán Ortiz & Michael Janisch Quintet. Janisch, the Wisconsin-born bassist, now a London resident after living in NYC, is an exceptionally accomplished musician who has arguably done more than anyone to bring about world-class collaborations between American and British jazzmen, culminating in a well-received 2010 album, Purpose Built. Ortiz, a truly remarkable young classically-trained Cuban pianist, has made a major impact on the New York scene since he arrived there in 2003. Currently a member of the Wallace Roney Quintet (and prominently featured on their recent HighNote CD, Home), he has also recently launched his own Quartet featuring guitarist David Gilmore, talented bassist Rashaan Carter and one-time Jackie McLean pupil Eric McPherson. Their stunning debut CD, Orbiting on Fresh Sound New Talent has already received rave reviews everywhere.

Trumpeter Raynald Colom, 34, is French-born but Barcelona-based. Much traveled, he is unquestionably one of his country’s most internationally acclaimed musicians. His music is firmly rooted in flamenco and recent sojourns in New York have resulted in two striking recordings on Jazz Village— Evocation (with Aruán, Eric and Israeli bassist Omar Avital) and the more recent Rise featuring Aruán, Rahsaan and Rudy Royston in the outstanding rhythm section.

Royston, from Ft. Worth, Texas, the dynamic drummer with this Quintet, has recently become one of the most in-demand, first-call percussionists in New York, partly through his appearances with tenor saxophonist JD Allen’s pianoless Trio on Sunnyside and Savant. For this writer, he is to JD what Elvin was to Coltrane.

Finally the featured guest star: one of the most respected and iconic alto saxophonists in jazz today, relative veteran Greg Osby. Sadly we haven’t heard him much on record since he finished his lengthy stint with Blue Note, but he has now formed his own label. As you’ll hear, his sound is even more personal than before and his improvisational skills are as inventive as ever.

A few impressions about the five extended workouts heard here…'Precisely Now': composed by Janisch, for your annotator this track personifies everything that is so creative and stimulating about the very best of contemporary jazz and shows there is as much passion in our music now—possibly even more—than there ever was. From the off, Janisch’s deep-felt bassline inspires superb slowly building solos from everyone and Rudy is in fantastic form. 'Jitterbug Waltz': Osby at his most inventive. Ortiz is ruminative before launching into a cascading waterfall of notes. Only glimpse of the original melody comes from Colom towards the end. 'Orbiting': Ortiz’s outstanding haunting theme with stark challenging changes and no apparent musical resolution, since re-recorded for Aruan’s own album. The piano solo floats before entering almost Tristanoish territory. 'Ask Me Now': Monk’s classic is interpreted from a totally different perspective. Wry observations from Colom and Osby in a conversational, even dream-like approach to the tune before a rhythmically quirky groove takes us out. 'The Maestro': Colom blows over a restrained broken-up rhythm pattern, growing in intensity, then Osby swings like there’s no tomorrow. Ortiz takes over, looking reflectively inward before starting to create—and then solve—ingenious rhythmic and harmonic puzzles, becoming increasingly complex and heated, like a dog harrying a tasty bone. An astonishing solo.

Then it’s all but over. So back to 'Precisely Now'!

"For an audio glimpse of ball-to-the-wall modern jazz in which extroverted improvisation is matched with high-caliber ingenuity and collective dialogue, Banned in London is a bustling live date that brings the good manifold"

"Cuban-born and New York Based Pianist Aruan Ortiz is one of the most versatile and exciting pianists of his generation."

"Michael Janisch is a commanding bassist, who brings a sinewy thrust to the ensemble with masterful agility."

"It could turn out that the best live jazz album released in the US this year will be one recorded at a British pizza joint in 2011."
JazzTimes Magazine

"Keep an eye this year on Arúan Ortiz [2013], a Cuban-born New York pianist who’s become a mark of quality on gigs and records... within the past year he's appeared on “Banned in London” (Whirlwind) in a quintet he leads with the London bassist Michael Janisch. (It includes the alto saxophonist Greg Osby, the trumpeter Raynald Colom and the drummer Rudy Royston.)... A versatile Cuban-born pianist."
The New York Times

"Starting off with a hypnotic, pulsing bass-line, this live album is a treat for bass players of a jazz persuasion. Janisch leads his quintet on a rip-roaring ride, doling out heavy grooves, tasty walking lines and melody by the bucketful. Like all good bassists, he knows when to sit back and let the lead instruments have their spot. The live feel of the album comes through in spades with an energy that leaps from the speakers. A superb album and worthy of anyone’s attention, jazz fan or not."
Bass Guitar Magazine

"Together they have prepared, in effect, a disc burning and absorbing, always on the edge of the blast but controlled through exemplary empathy. A great album, in short, of five musicians in grace.
★★★★ Cuadernos de Jazz (Spain)

"Banned in London contains some of the finest to be captured on a live album and ought to rank with the likes of Jazz at Massey Hall and John Coltrane—Live in Seattle for the seemingly endless stream of creativity from a group for all ages."
Latin Jazz Network

"Outstanding performances... this album captures the moment of a giant groove shaking the audiences of London."
Jazzlife Magazine (Japan)

"A masterclass in spontaneous combustion, with a first-rate group, summoning the spirit of the legendary Miles Davis quintet of the 1960s, but taking it to a new part of the harmonic and rhythmic forest"
★★★★ The Irish Times

"This is much, much more than a festival memento."
Hi-Fi News

"Banned In London is filled with exciting musical moments, making one wish he was in the front row of the concert. Play this CD good and loud; much joy can be had while the walls shake."
Step Tempest

"The London audience only got to experience this excellent music once. At home, you have the luxury of savoring this set over and over, and I urge you to do so. Definitely recommended."
Skremsky Reviews

"Janisch himself is a tower of strength, as he always is, providing the harmonic core, some of the most melodic bass playing in jazz."
Bebop Spoken Here

"This a great blowing session by a band with international flavor, recorded live at the 2011 London Jazz Festival. Janisch's dramatic bass solo starts the band rolling on his composition Precisely Now. Colom's fat, round tone is ideally suited to the band's version of Monk's Ask Me Now. Osby is lyrical on Jitterbug Waltz, even as he bends the Fats Waller piece out of shape. Royston's drumming is dynamic throughout, in ensemble and solo play. Ortiz backs the front line with taste and builds his own solos to an intense finish."
★★★★ The Winnipeg Free Press

"These fine musicians have something to say and no one else can say it for them either in the past or the present..."This record unites different generations of jazz fans who know some things never go out of fashion. In fact the concept of being ‘all the rage’ is just plain nonsense to these guys. Strictly no messing."
★★★★ Marlbank

"It's an explosive, well-balanced set and the horns sound invigorated by the band's feisty piano-bass leadership... Janisch's bass starts the engine with typical vigor in a Mingus-ish vocalized sequence leading to a grinding funk-rock groove for his 'Precisely Now.'
★★★★ Jazzwise Magazine

"A thick and rich brew of music."
The Independent

"Banned in London is a vigorous quintet date which gives the players space to stretch out... Jitterbug Waltz is a showcase for Osby, his whorls and snaky multiphonics create a wholly original variant."
New York City Jazz Record

"The playing is world class...the live vibe makes it feel almost as good as being there."
The Guardian

"It is the elemental urgency of the action of fingers on the taut and marvelously tuned strings of the acoustic bass herald the sound of music in the aptly entitled “Precisely Now”. Here Michael Janisch has created the music of “now”—that is music in the immediacy of the present. His brilliant pizzicato opening: curling notes ensconced in but a few chords that stretch their musical tentacles around the melody which follows force the mighty linear message to aim its lyrical arrows deep into the heart. Mr. Janisch is articulate in his muscular opening and what follows his challenge to dig deep is as mighty a response to his consonant and dissonant overture. Of course, this is the Michael Janisch that is heard throughout the record, pushing the drummer and the pianist to throw down gauntlets to the other soloists."
Latin Jazz Network

"Banned In London documents a hugely exciting jazz occasion that was evidently wholly satisfying for the lucky audience members that were there on the night, it crackles with energy from start to finish."
The Jazz Mann

"One of the most exciting casts of recent years."
The Daily Echo

"What happens when such creative, dynamic musicians meet? Light the fuse and listen to the fireworks... All the musicians are maestros on this superb album."
London Jazz

"This live recording from last year’s London Jazz Festival gig at the Pizza Express opens with Janisch’s bass and in his hands alone there is that thoroughly modern yet absolutely classic meeting of spontaneous melody and rhythm that is the intoxicating essence of jazz. The rest of the band kicks in – fellow leader Ortiz on piano, Rudy Royston on drums, Greg Osby on alto and Raynald Colom on trumpet – and Janisch’s perfectly-titled Precisely Now becomes a 14-minute rollercoaster ride with Royston and Colom in explosive mood and Osby in a gentler though equally intense place."
The Jazz Breakfast

"The atmosphere in the Pizza Express was tremendous, with each solo throughout attracting a voluminous and enthusiastic response from the crowd... The AO/MJ Quintet featuring Greg Osby delivered a mesmerizing performance."
Rainlore's World of Music

"A heavyweight collection of players."
The Irish Times

"Osby is swinging and mercurial, clarity mixed with intensity, the audience love his incisive solo."
The Jazz Mann