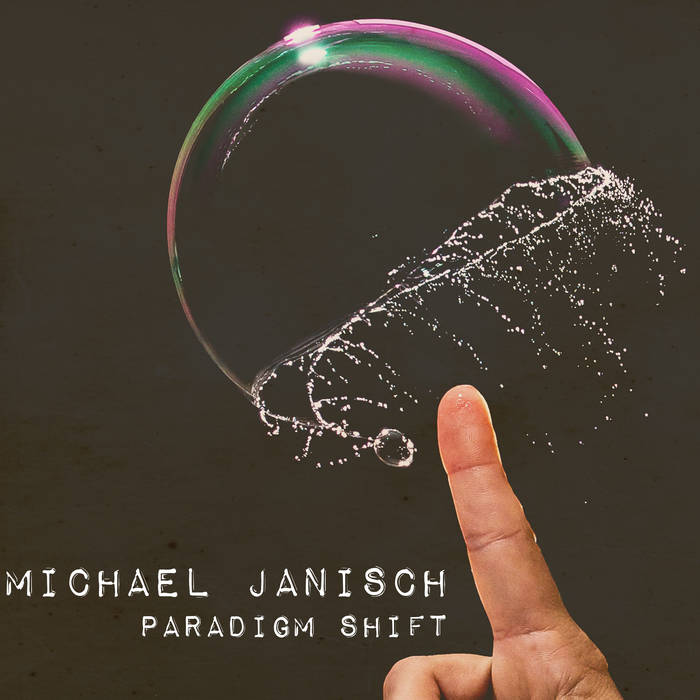 Some four years in gestation, the ambitious new double-disc project Paradigm Shift from London-based US bassist, composer and producer Michael Janisch sees the Whirlwind Recordings founder enter the spotlight with his multi-level approach to composition and performance. Janisch continues to garner enthusiastic press for his mastery of both double and electric bass, having released his solo album, Purpose Built in 2010 and co-led three further recordings to date - The TransAtlantic Collective's Traveling Song with Patrick Cornelius; the live quintet album Banned in London with pianist Aruan Ortiz; and First Meeting with the iconic Lee Konitz. Increasingly growing in stature as a creative artist, with this expansive new album he strengthens his already budding reputation as one of the preeminent bassist/bandleaders of his generation working in contemporary, improvised music.

On Paradigm Shift Janisch has taken as its basis a live quintet recording across two nights at Pizza Express Jazz Club, Soho (London), crafting and honing it into an absorbing 90-minute blend of live and post-processed electro-acoustic music. It's a particularly creative compositional vision which strongly reflects the bassist's personality, hewn from years of improvisational development and based on his own life-changing experiences, in particular the recent birth of his two daughters and sudden death of his older brother Joseph. The soundscapes he creates meld electronica, free improv, rock, punk and funk while retaining experimental and improvisational integrity throughout. And the conceptual and dialogical coalescence of all fourteen tracks here clearly comes from within, influenced by a vivid synaesthetic awareness - "It's been much more organic on a compositional level to just allow these new experiences to guide the writing process." - hence the fascinating, modulating moods and styles.

Predominantly a quintet album with engaging solo and duo interludes and segues, Janisch could hardly have selected a more cohesive and eclectic personnel to realise his artistic intentions: versatile British saxophonist and multi-instrumentalist (including didgeridoo) Paul Booth; leading US trumpeter Jason Palmer (from Janisch's 2010 solo debut, Purpose Built); free-spirited Argentinian piano/keyboard whizz Leonardo Genovese; and the sensitive precision of US drummer Colin Stranahan. Plus, the impulsive electronics of the London-based Alex Bonney feature on interludial tracks and post production effects (he performs with the band on tour to contribute these particularly effective manipulations).

Disc Two invites extended compositional contributions from the band, with Leonardo Genovese's 'Chacaraca' displaying South American hues; and 'Mike's Mosey' finds the bassist's colleages responding to his scampering free double bass improvisation in a cascade of moodly electronic soundscapes and unpredictable twists and turns. Echoic, chordal bass in 'The JJ I Knew' meditates through electronic colorwashes before hitting the fifteen-minute, playfully fast swing of Jason Palmer's 'Crash'. Leonardo Genovese's 'One-Eyed Calf' has to be one of the most extraordinarily unpredictable keyboard interludes out there, leading to Paul Booth's epic 'Awakening' which closes the set anthemically amidst a raft of deft soloing.

Janisch has become one of the foremost and genuine bassist-bandleaders of his generation, and it's testament to the invention of this strong sextet that the essence of this uncompromising double album was captured over just two straight nights of live performance. The combined interaction of these musically strong personalities paried with the creative post-production electronics surely provides the catalytic spark for infinite live and recorded freedom to follow.

"Paradigm Shift is as exciting a jazz record as any from the last 10 years."
★★★★★ Jazz Journal

"A highlight of Janisch's eventful career to date... the centerpiece of the album is the lengthy suite of the title track, which gives full vent to Janisch's ability as a writer who creates from the stance of a bold improviser, so much so that the music feels entirely 'lived in' and visceral..."
★★★★ Jazzwise Magazine

"An astonishingly invigorating listen... The results – the half-hour Janisch-written 'Paradigm Shift Suite' - not only has great variety, from full-on quintet to individual and duet interludes, but it also has a remarkable cohesion, a tribute to Janisch’s over-arching vision as a composer and band leader."
The Jazz Breakfast

"More and more Janisch grows in stature as a creative artist with his new album he consolidates his already excellent reputation as one of the outstanding bassist / bandleader of his generation in contemporary improvised music."
Medien Info

​"Outstanding electro-acoustic music... Creative compositions full of vision that reflect the personality of the artist... ​A sensitive and powerful album that is a pleasure both intellectually and musically."
Digitale Jazz Zeitung

"Surely this double album is one of the truly successful works in this year within this genre... The music flows powerfully, sometimes showing its claws, but also has its tender moments, and discreet use of electronic effects create mysterious moments."
Musik an sich

"Michael Janisch is a virtuoso on the bass and surrounds himself with like minded peers. The suite on disc one features his mighty improvisers. The variety of seemingly bizarre contrasts becomes the aesthetic concept here."
Jazzthetik Magazine

"Janisch’s virtuosity is unquestioned. On ‘Paradigm Shift’ he shows his own broad compositional soundscape and thematic grooves."
Jazz FM

"Paradigm Shift is bursting with ideas and potential directions and a powerful music statement from Janisch and his quintet.”
London Jazz

"A stellar international sextet... The performance of the suite was dazzling in terms of its power, precision and intensity, music that was visceral and uncompromising yet ultimately energising, enjoyable and invigorating for band members and audience alike. Catch the Paradigm Shift tour if you can."
★★★★ The Jazz Mann

"The jigsaw like quality of the music suggesting that our freedom lies in the ability to move between rock, punk, funk and of course more contemporary experiments within jazz. For artistic ambition alone this recording deserves the attention of those interested in how new sounds come into the world. The paradigm shift is a superb achievement."
Jazz Views

"An expansive and ceaselessly shifting affair, ranging through muscular ensemble playing and horn statements punctuated by solo electric or double bass interludes over a susurrus of electronics."
The Scotsman

"​Michael Janisch is simply a monster player. His bass skills on both electric and acoustic seem monumental and at the same time, effortless. He obviously loves a groove, though his grooves are more complex than your average funk/R&B bassist. His soloing is thematic and takes in the entire range of the instrument, often contrasting high note melodic statement with low note grooves.​"​
What's On​

"Brilliant... but infuriating."
The Guardian

"Janisch continues to prove himself to be one of the most forward looking bandleaders around and a major stimulating presence."
Marlbank

"Bassist Michael Janisch's new live double album, Paradigm Shift, is a groove-centric ride in a souped-up engine. Its moving parts are clearly in all working order, shifting and flowing like they were built that way. The rhythm section of Janisch, drummer Colin Stranahan, and pianist Leo Genovese is outstanding."
Nextbop

"At the epicentre is a four piece movement with the first movement noticeable for the use of repeated electric piano vamps and some hard-hitting trumpet that recalls the young Freddie Hubbard and overall comes across as similar in tone and multi-layering to Miles’ ‘Bitches Brew’ era."
UK Vibe

"Michael Janisch’s Paradigm Shift is one monster album. The movements, or sections, feature some of the best ‘on-the-bandstand’ improvisations committed to disc in recent times."
Bebop Spoken Here

"Paradigm Shift finished off the night with a tour de force display of instrumental firepower that ranks alongside any jazz gig I’ve been to in the past and I’m including some very big names in that list."
Mumble Music

"A wealth of imaginative, engaging jazz has been produced by bands that expertly bridge the styles of free-flowing acoustic jazz and electronic styles, but Michael Janisch’s Paradigm Shift must surely be one of the most accomplished."
The Jazz Breakfast

"[Janisch's] talented group, in particular saxophonist Paul Booth and keyboardist Leo Genovese, find plenty to say on the subject of the bassist’s involved and involving tunes."
The Irish Times

"​As a player, [Janisch] sits front and centre of the tradition, incorporating all kinds of European textural and harmonic innovations into the muscular, blues-to-bop language of contemporary America. The suite progresses through a parade of unexpected developments, from Sun Ra-style creaking clavinet to a stunning drum solo with vocal chorus interjections."
Jazzwise Magazine

"Exceptional... Paradigm Shift by Michael Janisch is a real pleasure and an emotional roller coaster for any open-minded music lover. A successful synthesis of live and studio recording... A very great bassist and composer, providing a wealth of ideas and musical command of his instrument, both the acoustic and electric bass."
Musikreviews Magazine

"As a musician, composer and producer, Michael Janisch enters the spotlight of the international jazz scene with Paradigm Shift."
Rhein Main Magazine

"The band carefully took the audience on musical journey most of them will not forget."
Jazz Views

"An album that wants to be heard... jazz at the highest level."
Der Hörspiegel

"An absolute treat of an album that is rewarded with repeated listening, even for the jazz novice."
Soul Train

"Explosive energy, palpable euphoria... ​an album with many changing climates that are often unclassifiable, a beautiful ​testimony to a ​virtuosic ​sextet that spares no effort."
Citizen Jazz

“Exceptional – A delight for any open-minded jazz lovers.”
Hörerlebnis