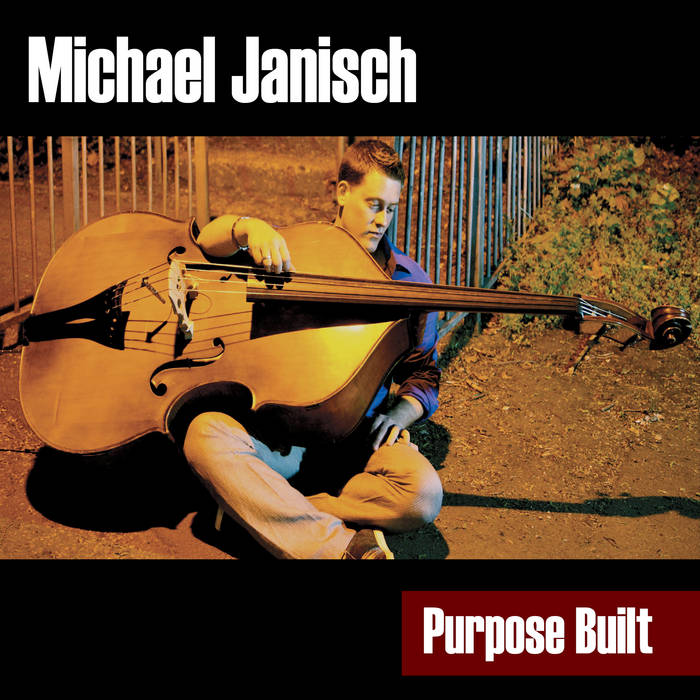 Purpose Built is the debut solo album from Michael Janisch, one of the preeminent young double/electric bassists of his generation. The album showcases music that cuts from a wide swath of the broad stylistic continuum of jazz history mixed with the eclectic range of the leader's musical influences outside the improvised realm. A healthy program of twelve tracks with eight originals and four artfully arranged covers, Janisch has called on a bumper crop of prominent musicians from his generation to bring his music to life.

Each of the contributors get plenty of time to shine on the album and in doing so turn out stellar performances, including tenor saxophonists Walter Smith III and Paul Booth, guitarists Mike Moreno and Phil Robson, vibraphonist Jim Hart, alto saxophonist Patrick Cornelius, pianist Aaron Goldberg, trumpeter Jason Palmer, and Johnathan Blake on drums. The music is presented in many different configurations from duet to sextet, all arranged by the leader.

The original compositions on Purpose Built are a mixture of contemporary sounds inspired by a lifelong study and performance of musics from around the globe with the binding thread throughout the album being Janisch's love of improvisation and keen focus on pulse and propulsion from his deep and full toned basses.

There are many moods to choose from as well: from the relentlessly grooving Dave Holland influenced 'Precisely Now', to the infectious ostinato of 'Adelante' (Mike Moreno's guitar solo an album highlight), to the full-on Charles Mingus inspired 'Shumshi', to the calm and propulsive 'Serenade of the Seas', to the melancholy 'Lost Creek', to the quiet and mysterious Billy Strayhorn classic 'Blood Count' to the drum and bass underpinning of 'Sofa Stomp' to the fiercely interactive electric bass and drum duet between Janisch and Blake on Coltrane's 'Moment's Notice', this is a debut album full of beauty, rawness, tension, drama, communication, power, experimentation, feeling and groove.

"Bass players, jazz lovers, music lovers… you all owe it to yourselves to check this album out! Janisch is one of the few bass players out there who plays both electric and upright with equal facility, passion and musicality. This being his debut as a leader, I can honestly say that this may be the best debut album I’ve heard yet."
Bass Musician Magazine

"Exceptional creativity, brilliant musicianship and compositional intensity are what bassist/composer Michael Janisch is all about, [Purpose Built] is the complete package."
Jazz Times

"His music is quite capable of creating beauty with attendant amounts of melodic and rhythmic interest... Purpose Built abounds with innovation, invention, and imagination."
The Musicians' Ombudsman

"One of the most important young bandleaders on the scene, based in London, this is a very strong album."
SK Jazz

"Clearly an auspicious debut, there's not a wasted note on board and left leaning jazzbos will be feeling it. This kid has got it going on."
Midwest Record

"An extremely interesting character, who's first album shows deep maturity and solidity. The musical field is definitely "made in New York" with its vibe, and has controlled lyricism in its compositions, fluid and complex, and based on well thought out rhythmical ideas, and great variety of climax and a nice balance of mixed influences."
Jazz Magazine

"If smart is sexy, then Purpose is an eminently sexy effort. The session has a staggering depth of thought, filled with content-rich pieces that routinely go beyond the genre's well-worn performance framework. Hopefully there is more where Purpose Built came from, because intelligent, full-bodied music like this is what jazz needs to succeed in this new century."
All About Jazz

"An estimable release from a talented and energetic young artist."
Jazz Chicago

"Purpose Built seamlessly marries the highest virtues of jazz – intricate yet purposeful rhythm, colourful harmonic language, compelling melody and high-level improvisation together with those often underused qualities of light and shade... A perfect blend of tradition and modernity."
Jazz Journal

"One of the most inventive cross-border bandleaders to have recently arrived on the scene."
The Guardian

"Exuberantly angular and rhythmic, can unexpectedly veer towards the tender."
★★★★ Telegraph

"The originals are fresh and memorable while the mix of NY and UK musicians deliver faultless and inspired interpretations."
★★★★ MOJO Magazine

"Impressive from beginning to end, Purpose Built goes a long way to building a sturdy foundation from which Janisch will undoubtedly carve out a long career in jazz. Excellent musicianship, intelligent compositions and an authoritative approach to the music, makes this recording an unquestionable success."
All About Jazz

"Unique... satisfying... one of the best albums of the year."
Blues and Soul Magazine

"Purpose Built is a classy set of serious modern jazz with a dark edgy groove at its heart... [Janisch's] playing is full-bodied and warm sounding, much like a cross between Mingus and Dave Holland."
Bass Guitar Magazine (UK)